The AR (Augmented Reality) is a technology to augment virtual objects to the real world. For example, focus the camera of your smartphone or tablet, 3D animation will appear; focus the camera at your hand so that you can try rings on without going to shops and buy them directly; wear the AR glasses (Smart galsses), a virtual keyboard will appear in front of you and you can input your words or browse the websites with a wide view; while assembling furniture, the directions will appear in the air.

The AR technology, one of the most attractive technologies in the world, has started to be used in the fields of advertisement, gaming, entertainment, tourism, medical care and manufacturing. The market was 65.1 billion JPY in 2013 and it is predicted to reach 282 billion JPY by 2018 (according to the research of SEEDPLANNING). The technology is great and interesting, but how can it be associated with business? PRAGE has been paying attention to this technology from an early time. The AR platform "ARcube" operated by us now has the largest market share in Japan. We are going to propose applications in various fields to you.

On 28 August 2013, introduced by the news program Super News of Fuji Television 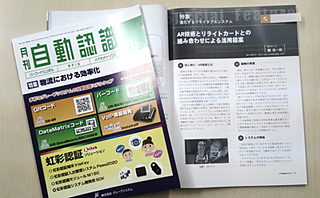 In the Monthly "Automatic Recognition", it introduced that Mitsubishi Paper Mills and we focused on the commbination of AR technology and the rewrite cards on which we can always rewrite the words and worked together to develop such applications. In the "Manager Communications vol.31", the usages of AR in business and activities of the local governments were reported.